★★★★
It's the single funniest thing I have seen in ages. You're gonna love this show!
Toronto Star

★★★★
A fabulously funny parody.
Will tickle the funny bone of every age group.
The London Daily Telegraph

PLAYING TO SOLD OUT HOUSES all over the world, the Olivier Award nominated POTTED POTTER – The Unauthorized Harry Experience – A Parody by Dan and Jeff takes on the ultimate challenge of condensing all seven Harry Potter books (and a real life game of Quidditch) into seventy hilarious minutes. Even if you don’t know the difference between a horcrux and a Hufflepuff, POTTED POTTER will make you roar with laughter.

★★★★
Blissfully funny, a winner in every way.
This show is a crowd-pleaser.
The London Guardian

★★★★
Cleverly appeals to both ardent fans and parents.
The London Times 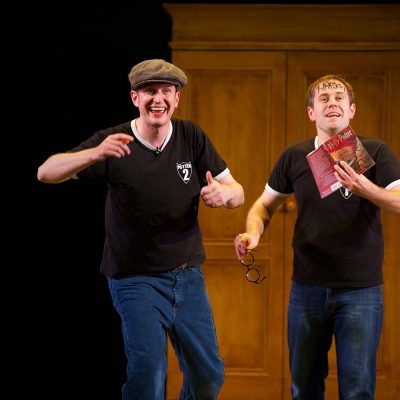 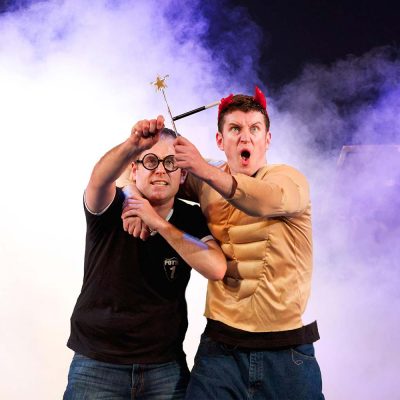 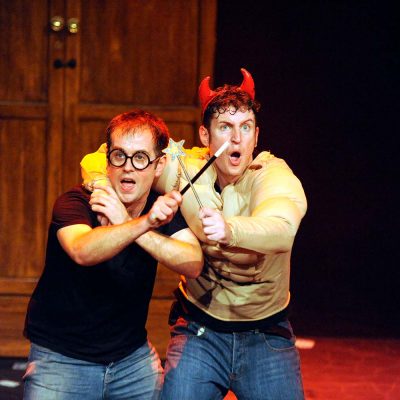 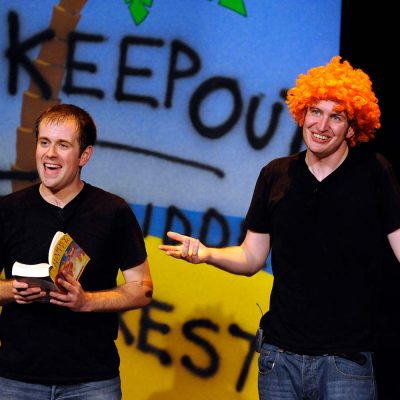 Dan and Jeff are asked to create a five-minute street show recapping the plot of the first five Potter books, for performance to queues of fans waiting for the midnight release of the sixth book.

Potted Potter is born as the street show expands into an hour-long performance in which the first six books are parodied. The show premieres on August 4 at Edinburgh’s Zoo Southside venue. Forging a partnership with producer James Seabright and director Dominic Knutton, Dan and Jeff premiere a new version of the show at Pleasance Islington in October.

Under the guidance of director Richard Hurst, the show tours the U.K. including Pleasance Edinburgh, where the seventh book is incorporated just a few days after its release. The tour finishes with a Christmas run at Trafalgar Studios in London.

Owing to their commitments as Children’s BBC presenters, Dan and Jeff hand over the show to a new cast, David Ahmad and John Helier, who take it on tour to Adelaide Fringe, Melbourne Comedy Festival, and New Zealand Comedy Festival. Dan and Jeff wrestle the show back from them for a third and final Christmas run at Trafalgar Studios.

The show takes a well-earned rest while Dan and Jeff create their new show, Potted Panto, premiering at the Edinburgh Fringe and transferring to the West End’s Vaudeville Theatre for Christmas, where it is nominated as Best Entertainment in the 2011 Olivier Awards.

Potted Potter returns for another tour, starting at Bury St. Edmunds Theatre Royal and including runs at Pleasance Grand and London’s Garrick Theatre.

The show continues touring in the US and Canada, including a second season off-Broadway and a return season at London’s Garrick Theatre.

Following its Mexican premiere, the show plays its first tour of Ireland, prior to dates on board cruise ships and across Australasia later in the year, concluding with a second season at Toronto’s Panasonic Theatre. Meanwhile, Dan and Jeff created their fourth show, Potted Sherlock, which premiered at the Edinburgh Fringe and transferred to London’s West End for a Christmas season.

A new tour of the US ran throughout the year, concluding with concurrent Christmas seasons at Chicago’s Broadway Playhouse and San Francisco’s Palace of the Fine Arts.

Dan and Jeff began the year with a tour of Potted Sherlock in the USA, before Potted Potter hit the road with locations including the show’s first trip to Kuala Lumpur, a return visit to DUCTAC in Dubai, and an extensive, coast-to-coast tour of Canada in the Autumn, concluding with seasons in Vancouver and Toronto.